The Tooth of It

I did not invent that pun, just FYI.

I have bad teeth.
Oh, no, my teeth look fine.  You can’t actually tell I’ve got bad teeth.  I mean, I wouldn’t compare my teeth to toothpaste commercial teeth or famous actress teeth or anything, but for a genuine human smile…not too shabby. Like so many things, they’re not as they appear  to be.

Oh, you have good teeth?
Even you still have all of your teeth?
You’ve never had a major dental procedure?
Yay for you.  I am not jealous.  I do not envy your strong, healthy enamel at all. 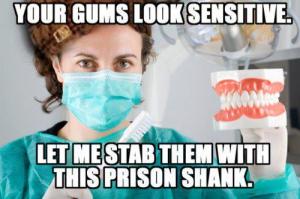 I don’t have sensitive gums…or, at least I don’t until the hygienist tries to kill me with her pokey tools.  She tries ruthlessly to make me bleed, but no, no, no, *shakes finger* she cannot draw blood, so harder and harder she tries.
I take Tylenol before and after every cleaning.

I take Ativan before any procedure involving a drill.

I am extremely sensitive to medication, so I generally take Tylenol for pain, and if I have to, I’ll break out the Ibuprofen.  But Ibuprofen gives me hives after awhile…
So mostly I breathe into my sleeve and try not to breathe at all.  Cause you know, toothaches only hurt when you breathe.

I had dry socket once.  That was a nightmare.  All I did for five days was take Vicodin, vomit, and sleep.  It was like having a severe migraine behind my enitre face for five days.  At some point, I tried to barter with God, but it’s really just a blur of hydrocodoniousness and cursing.  I do recall thinking I would take any drug imaginable to kill the pain…

I’ve never had the part where they need to deep clean. (Cause I’m a good flosser like that. *nods*)  I generally don’t need fillings.  No, I don’t waste my time on trivial things like fillings.  I like to get root canals, one after another.  When I’m not getting root canals, I have nothing better to do than to spend money on crowns for the teeth that have had root canals.

I’m the same way, medically.  I don’t get a cold or sprain my ankle, I like to dig deep and come up with precancerous cells or a nice bloodborne pathogen.
“I know you thought you had the flu, but actually, your blood says you’re on the verge of hospitalization, so please take these horse-pills five times a day for two weeks.”  I dunno.  *shrugs*

Braces almost killed me.  I wouldn’t eat anything but pudding and yogurt for two weeks; and only with my fingers.  Then fillings and wisdom teeth, abscesses and extractions, and is it me, or are all my worst teeth the ones that had braces bands?  I don’t know, because I don’t have them anymore.  Dying tooth?  Dying tooth looks fine, but hurts like Unholy Hell?  How is that even possible?  By the time I was thirty-five, I had had enough toothaches to discuss the idea of full-mouth extraction and dentures, but it turns out that’s a last resort to total tooth failure, and in the words of my dentist, “They’re not that bad.”
I believe that may be their way of getting you to buy them a summer house, but I’m not too sure…

Unfortunately, I’ve given my bad teeth to Moo.  She had four fillings, two pulpectomies, and two extractions by the time she was seven.  Other kids are fine.  Have their father’s strong teeth.  Again, I am not envious.  I could care less if Sassy went six months without flossing because it doesn’t feel good.  It doesn’t matter to me that she still got a perfect dental report.  I do not resent her, or cry about the injustice of it while I wind the floss around my fingers…

So if you have the good teeth, please you stop a moment to count that blessing, because some of us work awfully hard at keeping the bad teeth we have.

4 Responses to The Tooth of It