We went to church yesterday. We didn’t go to Sunday School. We just went to the morning service. Of course, the service entailed the story of Christ’s resurrection, replete with a slide show, music, and a sermon wherein we were specifically told that since we are not living in the light of Christ our Savior, we are in Satan’s grips, doomed to death and darkness. 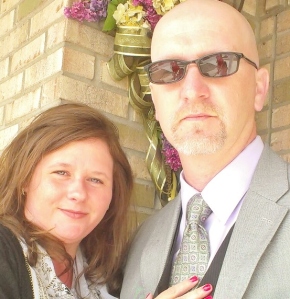 I wore black. MIL still kissed me and said I looked pretty.

I was prepared for that. To make it more painful and time-consuming, it was also time for Communion. In a Protestant church, communion allows the pastor to see how many people have not accepted Jesus Christ into their hearts. He then can use this information to call upon the Holy Spirit to move people to come to Jesus. It’s a marketing tactic, of sorts. This was all after hoping we’d empty our wallets for the missionaries. Literally, he said that as Jesus’s grave was empty, so should be our wallets. While I normally give offering at church, the pastor’s sense of humor made me feel bitchy and greedy. 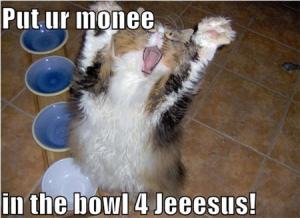 I’m not a fan of missionaries. It’s like the Peace Corps, but with a Jesus Clause. The basic improvements are noble and humanitarian..well, I’m not sure why it is that people in other lands have it so wrong, or why they need to love Jesus in order to appreciate education or clean water.  Also, read The Poisonwood Bible and get back to me. 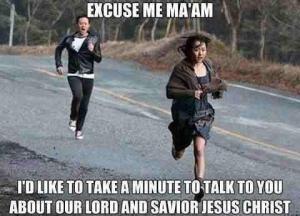 My in-laws are very churchy. Church is twice on Sunday, Wednesday nights, plus the odd activity here and there.
As previously mentioned, we are not churchy. We prefer to live a largely secular life. The Mister is a Christian, by way of faith, or mostly, or somethin — I’ve never really clarified his beliefs…but we’re both anti-organized religion, as we are not fans of persecution and war. We talk about God in our home, but not in a way that involves fear, sin, or Hell. 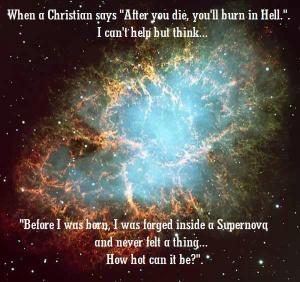 Having grown up without indoctrination to religion, our children are inherently suspicious of scripture and matters of the proclamation of faith. We don’t speak of Jesus unless we’re prompted by the childrens’ questions. We’ve long assumed it’s easier to leave the Jesus space empty, in case they want to fill it in later, instead of them trying to remove the Jesus ideology when they’re adults.

On the way home, Sassy informed us that she was tormented at Children’s Church, where they told the story of the crucifixion. She said, “I was picturing a lot of blood. Like a lot, a lot, a lot!” I told her the gorier it is, the worse you feel for the man who died for your sins, the more likely you are to be motivated by guilt to become a Christian. 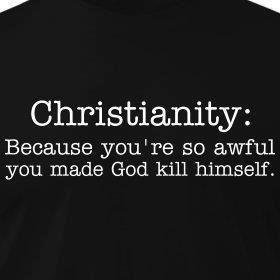 Since Moo’s last interface with the Bible had her reading and cackling, asking me, “Who wrote this?!?” while checking the cover for the author, I’ve advised the children just to nod and smile along whenever anyone says anything particularly unreasonable.

Sassy’s experience reminded me of Easter three years ago, when her daddy was deployed, and my cousin and her boys were coming to visit. It began at the commissary, “Why you buy so big ham?” she asked. I told her “Because it’s what people eat at Easter and it’s on sale.” She wanted to know would the Easter Bunny come and would we also have hot cross buns? I said I probably wouldn’t be up to dealing with dough enough to make hot cross buns, and that no, the Easter Bunny has never been to our house, (although I do assemble and hide a basket) and then I told her what the celebration of Easter was about. 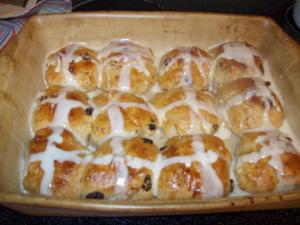 Me: The Christians celebrate Easter because Christ came back to life.  See, on Friday, people hung Him on the cross, and then on Sunday, He came back to life.  Sunday is Easter.  It’s to celebrate Jesus.
Sassy: @_@  What do you mean He came back to life?!
Me: They said it was a miracle because they believe He’s God’s son.
Sassy:  Well, he is God’s son, but I dunno about all that.  I think no matter whose kid you are, when you’re dead, you don’t come back.
Me: Okay, well you can believe what you want, that’s called faith.  Your faith doesn’t hafta be like other peoples’.
Sassy: *raises eyebrow* Do I know anyone who thinks Jesus came back to life???
Me:  Most everyone you know believes this.
Sassy: @_@ like who???
Me: Mamaw, Papaw…all the Christians.
Sassy: Do YOU believe that???
Me: No.
Sassy: Does daddy believe Jesus undied? Sissy, Bubba?
Me:  I dunno about Daddy. I’m not sure about Sissy, either, but Bubba thinks not.
Sassy: Huh….is there a story about it? I think I need more information.

SHE IS SO MY KID THIS WAY.

I read Sassy the story of Easter from the Children’s Bible. We own seven Bibles. I dunno.

Sassy: That was a nice story. *flaps hands*
Me: Yes, I think so, too.
Sassy: Mama?
Me: Yes?
Sassy: There was no ham, no bunny, and no eggs.
So I told her about Spring’s young animals, Ostara and the concept of rebirth.  She thought that was a nice story, too. 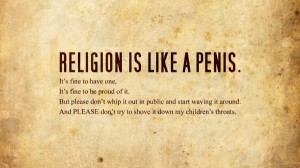 The other day, JLW posted a blog inquiring as to why non-Christians celebrate Easter. Personally, I thought she was too intelligent to ask this question and then I remembered that she is blonde, and may have been under heavy duress, what with all the odd sock matching that lay before her… *winks* The question is not why non-Christians celebrate “Easter,” *achem* but rather, why do Christians keep so many ancient, pre-Christian, Old God traditions from around the world alive? Also, why are so many of them unaware of the origins? Don’t ask them, they get very upset and yell at you for “challenging their faith.”

I do sometimes just smile and nod along. I have plenty of Christian friends. I assume they tolerate me and secretly pray for me to find Jesus. (Which I did, just the other day, at the new age shoppe..) 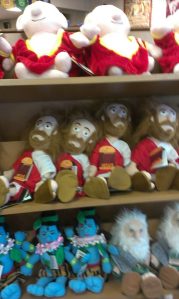 Everyone’s certain that THEIR religion is the best religion, except the atheists, who are sure all the people of any faith are the cray-cray.  But I’m just sayin, there’s somethin not-quite-right here.. often, alawt. 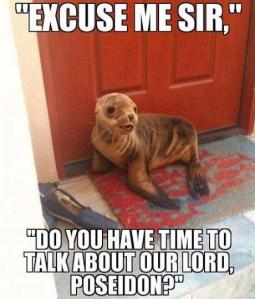 (Also, I can’t figure out why in the name of tacos so many Christian bloggers are following me. Was I unclear?)