Cause bitchin on a Tuesday is my new joie de vivre.

When I came home at 7pm, I immediately shouted at Moo, “Why aren’t you working on the Challah?! You’ll be up til midnight baking Challah!” I had to yell, cause 1) Moo was asleep and 2) As we all know, I’d be up right along with her, makin sure the house doesn’t burn down.

I supervised the yeast. Then I just sorta stood around nagging about leveling flour and counting carefully, how mothers do.

Moo is like her brother in myriad wonderful ways. She has an admirable moral compass, she can math in her head, she likes to try new things. Of course, she has less desirable traits like Bubba, too. I struggle to understand how I’ve raised two children who don’t know where anything in the house is.
“I don’t even know where the bread flour is.”
“Still in the bag, next to the rolling pins.”

Can I just say we have a baking cabinet?!? In which she did not even look?!?

Moo made this sorta exasperated face and threw her hands up. I had to point, to the counter, where the flour was in plain sight, next to the rolling pins that have lived there as long as we have.
In case you think Moo is unfamiliar with the look of flour or rolling pins, No. She has been baking breads with me since she was, I don’t know, four? five? Little.

“Where is the yeast?”
Lawd.

Moo doesn’t share the language of common household items, particularly furniture. End table, coffee table, dining table, sofa table — those are tables undefined for Moo. The language of Moos is always entertaining, but at times it’s frustrating as well because I literally never want the dough rising on the coffee table. Never.

Anyway, the Challah business was for extra credit at somethin called East Feast.

Initially, I was asked about quinoa or hummus or Israeli salad and these arguments went on way too long because I was tired and empty and that’s when children get at you.
“Quinoa!”
“Quite costly for 150 kids who prolly won’t like it. Also, doesn’t travel too well once there’s cheese in it.”
“Hummus?”
“Oh my word. Boil and drain and shake and peel and food processor. Ugh!”
“I’ll clean the food processor.”
“But it won’t actually be clean. Do we still have tahini? You know this is why I just buy the Meijer hummus, right? And what will you serve it on?”
“We could make pita!”
outta yer ever-lovin mind
“No. Cucumbers?”
“No, Mama, kids hate cucumbers. I don’t wanna be that girl.”
“You love cucumbers!”
“Israeli salad!”
“For 150?!? And also, IT HAS CUCUMBERS! We have some spelt flour. Bake some bread.”
“What’s the significance of spelt flour?”
“It’s ancient.”
“But is it special?”
“Are quinoa and hummus and Israeli salad special? You know what’s special? Challah.”

I don’t always have EIGHT POUNDS OF BREAD FLOUR on hand, so yay, more shopping! You know, cause extra credit.
About an hour after buying the additional flour, I received Moo’s electronic gradebook update and she had 93.15% in social studies, and I do not understand this need to excel further into excellence. I blame her father.
Her father slept on the sofa during the baking, because he had out-excellenced himself since dawn. He said he didn’t want to go to bed, because he didn’t want Moo to burn the house down, but truly, he didn’t want to go to bed without me. He set an alarm for the first batch, but he slept through his alarm, and we turned it off, and then about twenty minutes later he awoke to say, “Smells like bread. Check the bread.”

Moo wanted me to help braid the dough. I don’t know why. I’m a kick-ass hair braider, but when it comes to Challah, my braiding looks like Cthulhu has attacked the kitchen. I refused, because not only have I aced geography but I’ve also aced Challah.
As it turns out, Moo is a fabulous braider.

Oh no, now she’ll be asked to braid future bread too! Hahaha! 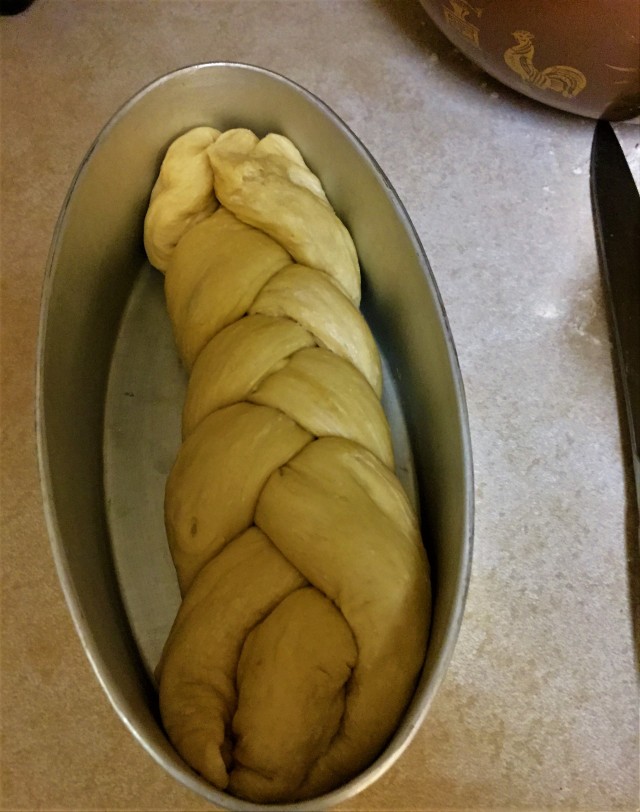 We finally packed it up at 2 o’clock in the mornin. She wanted to take two sticks of butter. I wouldn’t let her take but one. I suggested she take a jar of strawberry preserves. She said, “People don’t like jam.”
Who the fuck doesn’t like jam?
Moo herself eats jam like it’s life.

She took nine loaves of Challah, the one stick of butter, and the jar of preserves and came home with nothin.

I kept one loaf, and secretly stashed another one in the oven.

I tell you what, I ate a few slices, warmed, slathered in butter and blackberry preserves, and I feel like it was worth it.

80 Responses to Hollerin About Challah