I just played DOOZER for sixty-two points.  On Scrabble.  I play Scrabble because I’m old and geeky, as opposed to the young, cool people who play Words with Friends.  I’m sure whole new words for young and cool have been developed, but I am too old and geeky to be kept abreast of such matters.  Sometimes my kids tell me what’s cool or not, and they always promise me that they don’t want me to be cool…

Anyway, back to my DOOZER.
If you’re about my age, chances are that you remember a television program by the name of Fraggle Rock.
Honestly, I don’t remember what exactly Fraggle Rock was about, because that was in nineteen eighty*inaudible*, but I totally remember that I loved that show.   Something about a cave, and a shaggy dog, and a kitchen, and giants?  The best part of the show featured the tiny green creatures who constructed clear structures via radishes….*shrugs*  I dunno, I was like, nine, and it was fantastic! 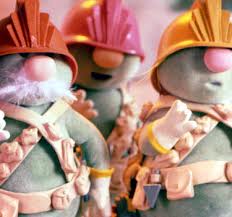 The mustached Doozer there on the left was such a crotchety fella.  He was serious and dependable.  What a hero.

I Googled the actual definition of doozer, and it turns out that it’s synonymous to doozy and doozie.
And here I hoped Scrabble had begun including Muppets.

4 Responses to What a Doozy