I read Marian Allen’s short story about alligators today and thought maybe I’d tell you about the alligators in Georgia.

First off, there are alligators in Georgia.

As a Hoosier, my experience with alligators was limited. I’d pet and eaten alligator in Florida, how tourists do, but alligators are not native to Indiana, and so not once had I left my house and thought gee, i sure hope no alligators eat me today.

I moved to Georgia mid-June, which means I thought I had moved to the sun. The climate itself was inhospitable, so I had to adapt before I could learn to fear local predatory animals.

Within a few months of living in Georgia, we all went to Family Night at the swamp. 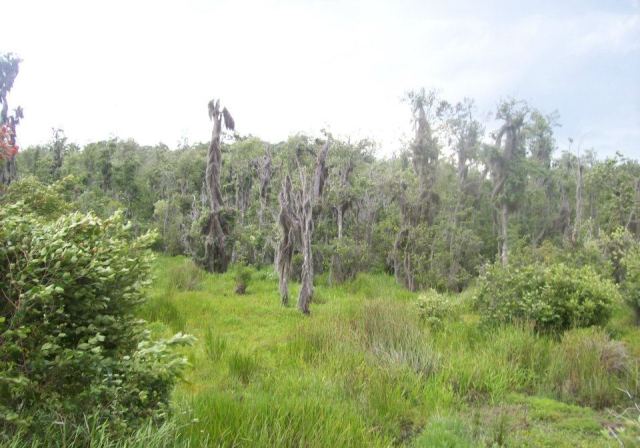 This was called Mandatory Fun, which The Army was fond of, and which was regularly scheduled so that you could test your endurance for mental anguish. First I was taken into a large screened-in pavilion where I was told my husband would likely die over the winter, then I talked to someone about Pink Floyd because I didn’t know the guy was The fucking Company Commander and then I spent all night worried about the alligators. Specifically, I worried about the alligators eating my children.
I could easily visualize the scenario. A swarm of alligators, their yellow-green eyes glowing in the night, rising from the pond, chomping up Army Brats as they scoured the playground for bigger prey. Everyone running and shrieking as more and more alligators emerged.

When my husband deployed that winter, I took to long walks, which helped me not think as much about his imminent death. I walked sidewalk trails in our neighborhood, one of which curved around a swamp. I hadn’t thought a thing of it — all the walkin and joggin mommies frequented these paths. One day a neighbor kid told me to be careful because he’d seen an alligator in there.
An alligator. A few blocks from my home. Good gravy.
Army wives from Florida said if I didn’t bother the alligators, they wouldn’t bother me.
I used to say the same dumb shit about yellow jackets.

I decided I preferred jogging around the swamp.

After my husband didn’t die, he came home and we made a lot of trips to the VA hospital in Augusta, because what doesn’t kill you will kill your spine. We saw a lot of things on those trips, but mostly we remember the tornado and the alligator. An alligator crossed the road in front of us, and let me tell you, they are WAY faster than my imagination can handle!

I didn’t see another alligator for almost a year.

As every worrier knows, it’s when you stop worrying about things, when you think everything is right as rain, bad stuff happens. One day, on that trail by the swamp, an alligator heaved itself up from behind the cattails and plopped down on the mud in front of me, like it was no big deal.

When we adopted our Sadie dog, I frequently took her to The Swamp of Mandatory Fun to let her walk off-leash. Yes, it was against the rules, but there was never anyone there. Sometimes True and I would take the kids out there to play. It was the closest thing to my version of nature we had. (Sometimes I even saw birds there!) The sun would kill me if I stayed on the sidewalks, the woods harbored wild boars and creeped with stinging nettles and poisonous plants.
The swamp, even with its occasional alligator heads surfacing, was the clear choice. 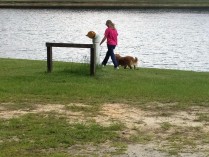 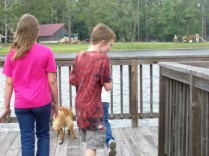 Coyotes are not frequently spotted in Indianapolis. What predatory animals live where you live?