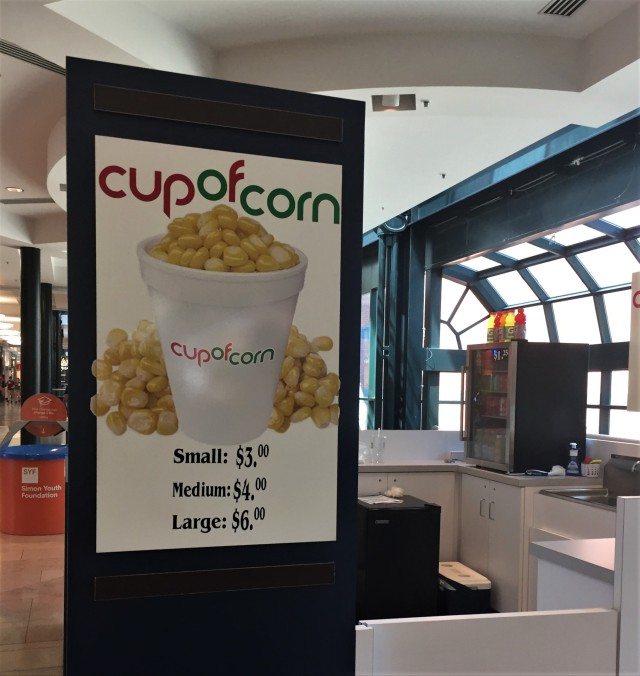 Overpriced corn in a cup.
It’s frozen, not even fresh. It’s not even locally sourced and then frozen.

Fortunately, a pair of elders was nearby, and as I stopped to photograph it, the female elder and I had a lil chat about the fuckery, the highway robbery, the insult to corn itself.

Corn is at most a dollar an ear, here, fresh — FRESH! There are times at the end of summer when you can buy a fresh ear of sweet corn for ten cents! Why the fuck would I buy a ten-ounce cup of corn for six dollars?!?
People do this?!?

Is this Indiana tourism at work? Corn in a cup?!? Are these throughout the corn belt or what?
I gotta tell ya, it felt like a parody. A crime. Sacrilege.

People, Hoosiers do not eat corn in a cup. We eat it boiled fast, simmered slow, roasted on the grill, creamed, charred in a skillet, heavily buttered and salted, ground into meal and grits, popped, WE EVEN EAT CORN CASSEROLE — lotsa, lotsa ways to eat corn — but in all my life I’ve never eaten frozen corn steamed and poured into a cup!
Corn in a cup. Well, I never!

So I looked it up, and apparently, a man from Turkey is responsible for this corn in a cup atrocity. He attributed the idea to similar stands in international markets. For instance, Mexico, where corn on the cob is grilled and topped by street vendors.
Corn on the cob, I think is the key phrase here.
We corn-fed people are partial to our COBS.

“That corn-in-a-cup thing is pretty big in Europe. It’s a very healthy snack. Even if you eat a lot, it doesn’t make you feel bad.”

There are topping choices for the corn.
I’m not even kiddin — hot sauce, parmesan, sour cream, lemon pepper, barbecue sauce. The man from Turkey says he likes his with barbecue sauce and parmesan.

What is the world comin to?

Have you ever? Would you ever? Are you stunned? Bemused? Horrified?

96 Responses to Well, I Never!