My apologies, but this week’s funnies are completely ineligible for blogland. More than half of them were just plain mean. Oh, the stories I could tell you over mojitos on the porch, but not here. *shakes head subtly*
The rest are wildly inappropriate, even for me and my Not A Nice Lady Blog.

Maybe I can get a giggle or a heh. Maybe.

It’s been a weird, Sassy-less week. This is the longest I have gone without Sassy since I grew her. She’s stayed with her auntie and our mothers, but never this long.

I admit, completely, to being the sort of woman who cries a lot. I’m a crier. Motherhood makes me cry more. Usually tears of pride and joy, but sometimes worry, and occasionally the bittersweet trickles right down my cheeks.

The Mister tells the story of how he took Bubba to kindergarten. I wasn’t there.

I home-schooled Sissy for kindergarten and when I dropped her off with Bubba at the great big school swarming with giant children, I struggled to let her out of the car, for fear she’d be trampled and wander the halls bloody, bruised, and crying. I made her recite her information several times before I let her out — and then I cried all the way home.
“She’s so small!” I told people.

The Mister and I walked Sassy to her first day of pre-k, and even though she towered over her classmates, I still cried a bit.

The Mister and I walked Moo on her first day of pre-k and though I did feel the lump in my throat when I put her down, I did not cry.

When they go away a while, I do sometimes ask my girls if they wandered around cryin for their mama. Apparently they do not do this. Generally, they have a swell time. After a few courses of swell times my worries have lessened.

I mean, that’s what we’re doin over here. Raisin people to go off and make a life. So you know, they gotta get practiced. I’ve written about this before.

Then I had to leave my teenager for a week.
An hour away.
On a college campus.
With thousands of stranger people.

And though my heart swelled with pride and wonder at all the joys she brings me, I had to cry all over her face a wee bit, because there, she seemed small. And I worried she’d wander around cryin for her mama — but of course, non, again, swell time.

Sassy spent the week at Ball State University, which is my alma mater.
Sassy earned a spot and a partial scholarship to the summer orchestra program.
*waits for applause to Sassy*

People from not round here often laugh at the name Ball Sate. Ball U. Har-har-har!
But lemme ask you this — Ever heard of Ball jars?!? 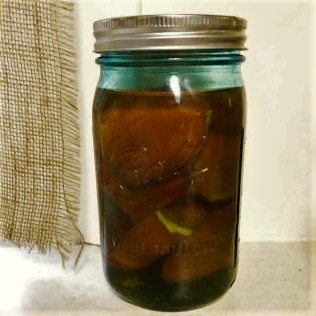 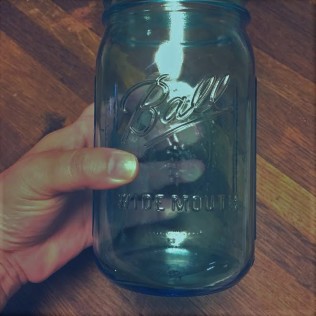 In Indiana, if you wanna be a teacher, you go to Ball State. You can go elsewhere, and people do, but it’s primarily a teaching school, as that’s what it began as, back when they called them Normal Schools.
Here’s the Ball State Teacher’s College Building — Please note it is unchanged. There are no rich and famous teachers to endow it. 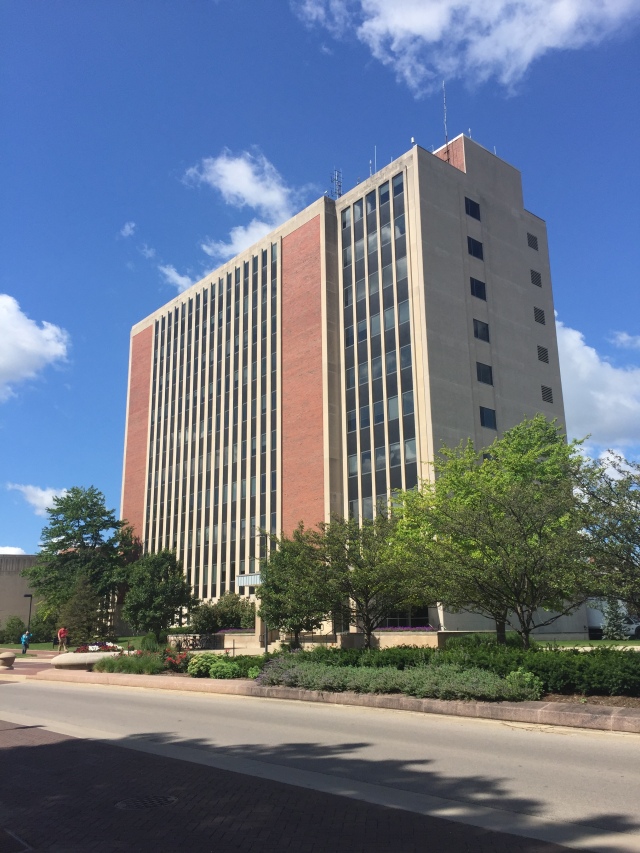 That’s not to say there aren’t other outstanding programs at Ball State, cause there are, but there are plenty of good schools to choose from here in Indiana. I know, it’s weird, cause we’re all farmers and stuff, but we’ve got IU and Purdue and Notre Dame and Butler, and if you can imagine, people from out-of-state sometimes come here to get educated. Some of those people don’t even farm or play basketball! 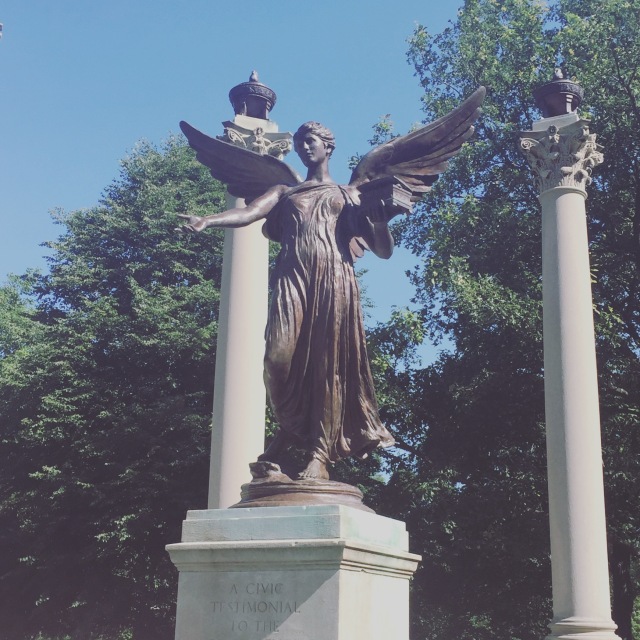 that’s beneficence, we call her benny

Ball State has churned out some famous people, hundreds of whom I don’t know diddly about, but notably, David Letterman, Jim Davis (that’s the creator of Garfield, y’all) the Papa John pizza guy, Oprah’s boyfriend, and Janet from Three’s Company.

As if it wasn’t bad enough that our high school now has an auditorium named after our principal — See, ya know you’re gettin old when memorials are named after people you actually knew — there’s nothin quite like visiting your college campus 21 years later to demonstrate how time done crept up all over you.

I’ll tell you what — they have benches at Ball State. In fact, seating is available most everywhere — built into the sides of buildings and walkways and whatnot. Moo and I sat on some benches I realize were there when I was a student, and yet, I do not recall, ever in four years, needing to sit on a bench. I don’t remember seeing so many benches, even though clearly they’ve been there, lots of them, for a hundred years or more.
Isn’t that bizarre?!?

When we first arrived, some darling young person thought I was a student. Flattering, but clearly, as I sat on three benches in one day, my feet knew I was a mom. I still swing my feet like a kid, but I’m a mom. 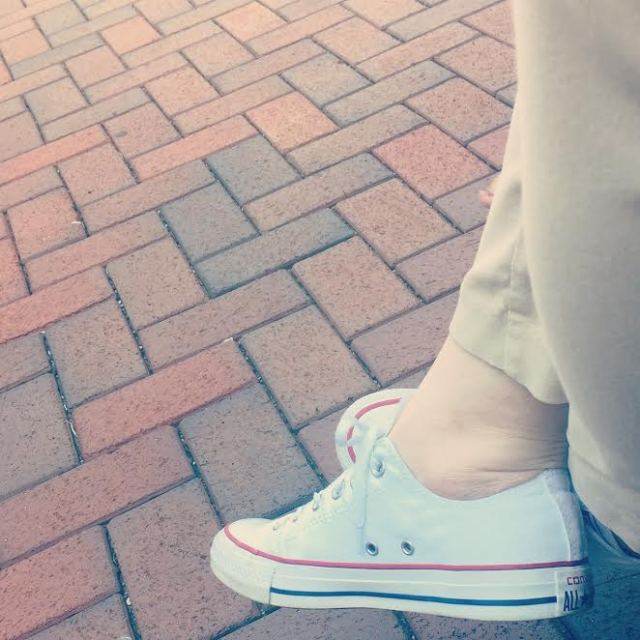 Plus, I wore khakis. I mean really, do young people ever wear khakis? On purpose? Mine don’t.

If you have not had the pleasure of walking your old college campus, I kinda recommend it in a sadistic-nostalgic way. For one thing, there’s no way to describe the surreal experience of a place that’s familiar, but in a strange way, you feel like you might could get lost. I had several shocking moments of “Well that’s new!” and “Was that church parking lot always there?” and “It’s got air-conditioning?!?”

My residence hall, to be reopened this year, DID NOT LOOK LIKE THIS. 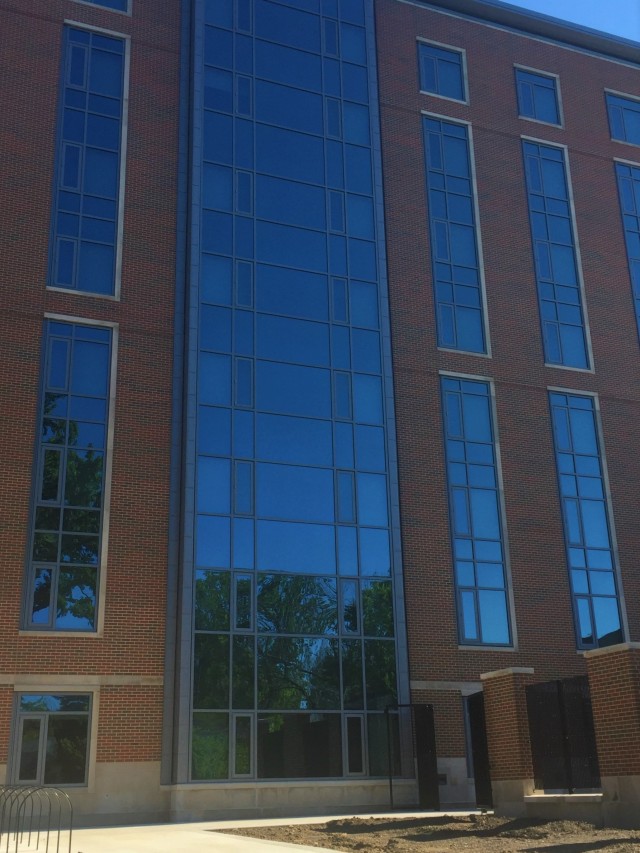 Um, no. It looked sad and 1980 brick brown and it had a wonky elevator and to be fair, it was one of the nicer, newer dorms, cause Honors. But still, this is freakin palatial compared to where I lived. Do you think they’ll put the enormous pleather chairs back in there? Cause I don’t.

Over by the nunnery (Women to Men at Ball State is 3:2) there usta be a sorta scary building where people had dormed since the abacus, and now it looks like this. 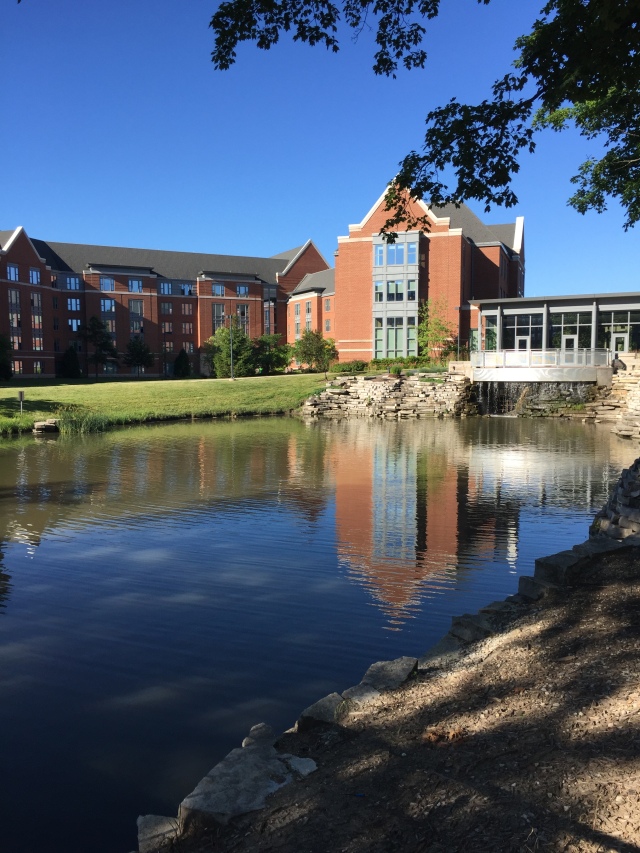 I walk 2-3 miles on a regular basis. That’s pretty much Sadie’s threshold for her bum paw which sets the standard. Sadie was glad she couldn’t go. No doubt she stayed home petting the cats and catching up on Broadchurch.
We walked so much at Ball State — the following day, Moomalade the Intrepid said she felt old! *gasp*

I usta could walk like that five days a week no worries? What the hell kinda shoes was I wearin?! I only remember the snow boots.

I drove to and from, and I’m about to tell you somethin even weirder than the bench thing — It’s closer now. I know. That’s not possible. But I swear to you, it’s closer. Maybe less road construction, maybe more lanes, less traffic. I don’t know. But I lived closer then than I do now and I can tell you it took at least 30 more minutes in the 90s.

I expected to have horrendous anxiety driving, but I. did. not.

Most of my anxiety materialized in nightmares. I missed my daughter. An uneasy, essential feeling for us both, a precursor to the future. It even made me miss my own mother more.
I have never been down to one kid. I didn’t even start with one kid. Weird. Quiet. Not that I could hear myself think or heaven forbid, visit the bathroom alone, but so much quiet.
Moo loved every minute of it. Never had to wait her turn to talk. Never had to choose a parent — merely squish up in the middle. We spoiled her rottener. Must have been awful for her, eh?

Thanks for reading, or you know, for clicking Like and then making an unrelated comment that insults my intelligence. That’s two long posts in one week. You like I make you a mojito? Wanna sit out on the porch and enjoy the rains?