Today, I took Sadie in for her annual check-up.

Since we moved to The Mister’s old neighborhood, it’s only about ten minutes from my house now. I debated which route to take, and ultimately decided to take the long way around, avoiding any potential mishaps.

I arrived early enough to *achem* listen to stranger people. Said stranger people were some of those status-seeking people who go out of their way to tell you about all their dog’s achievements in this class and that, as well as how their German Shepherd came from Germany, as well as how they paid a thousand dollars for her, (they mentioned that three times) as well as how well-trained she is because of all her achievements in those classes.
I nodded along how I do, with the occasional, “Is that right?” thrown in for good measure.

She was a beautiful animal. I am sure she’s well cared for, and obviously she will breed the most beautiful puppies ever. Just because her people don’t know how to breed her or when to breed her, or how many puppies there are in a Shepherd litter does not, in any way, indicate that they are irresponsible breeders. After all, they took a card from another stranger who will provide a sire, and he knows a lot about breeding, since he had a pregnant dam with him.

The fact that German Shepherd Rescue of Indianapolis currently has nine full-blooded Shepherd pups up for adoption is completely inconsequential.
We want uneducated people breeding dogs, don’t we?

Meanwhile, I sat there with my broken mutt rescue, whose “papers” consisted of vet records, for which we paid a $20 handling fee, her head rested in my lap, with her paw on my knee, and I thought about how glad I was that Sadie didn’t know anyone found her inferior. My poor bastard dog, with her abusive background and a permanent limp. Poor thing. Good thing we spend our time loving her and not pitying her lack of breeding or her previous circumstances. I mean, just imagine how her self-esteem would suffer! 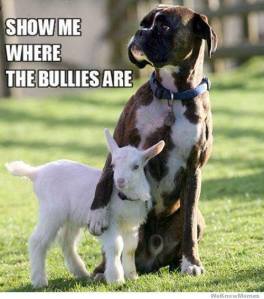 I’m also glad the German Shepherd couldn’t feel how much I pitied her and her people.

When Sadie was called back, she hopped down, and that well-trained German Shepherd popped up to check her out. Her people did not like that, but none of their commands could keep their dog from acting like a normal dog, and her male person got downright mad, with his face all red, yelling, “Back! No!” along with other German words and her name. (Didn’t they teach him not to use her name during discipline? Isn’t this in Dog Training 101?)
Meanwhile, I stood there smiling at how well my mutt socializes, and when the dogs were done, Sadie and I followed the lady back to the exam room.

Sadie LOVES to go to the vet. I suspect it has to do with her puppyhood, when the vet made her feel better.
She loves all the people, all the other dogs, and jumps right up on the scale, where I swear she smiles. Then the vet tells her how soft, how pretty, what shiny clean teeth, how fit, what fluffy ears — I am just a little bit jealous my doctor doesn’t do the same for me. 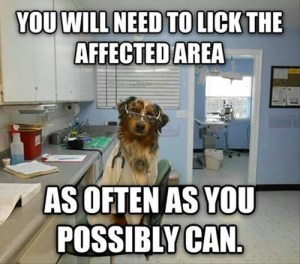 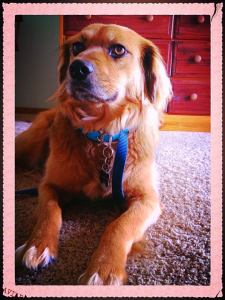