As some of you know, Friday was our anniversary, and we spent the weekend CHILDLESSLY celebrating.
Our very sexy anniversary weekend began when The Mister paid two tattooed, sinuous, half-naked men to … mow our lawn.

I keep tellin ya, this is not that kinda blog.

We had an absolutely marvelous time.

We talked a lot, about important stuff and the future. We reminisced some. Like the shock of telling people we were getting married. How some people claim they’d always known, and how other people still can’t get over how we happened to begin with.

You can tell a lot about people by the way they react to, “It’s our sixteenth wedding anniversary!” Many people cannot hide their revulsion. Same kinda people who say, “FOUR? You have FOUR kids? On purpose?”

I live in a state of constant surprise myself. If you’d told age twenty me that by thirty, I’d be married with four kids, I would have laughed and laughed, “Oh yeah, right! And I bet at thirty, I’ll be good at math, too, huh?”
If you’da told me that I’d only grow more in love and more satisfied over time, I woulda said, “Stop it now, you’re scaring me.”
People are always going on about how life is so unpredictable, but too many forget that life is surprisingly good in the most unexpected ways.

My face still lights up when he enters the room. I still get butterflies when he touches me.
Um,  I’ve also never come so close to hating anyone.

So yeah, we took a weekend to celebrate that — In the car, at Starbucks, at the liquor store, on Mass Ave, on the sidewalks, in restaurants and bars, at the deli, at home, in Broad Ripple, on park benches — we were happily married all over the place. It was absolutely disgusting.

Since it’s not that kinda blog, these are the sexiest pictures I can show you. 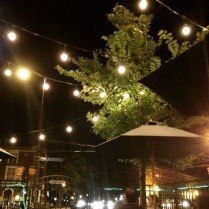 i insisted on dining al fresco with the twinkly lights 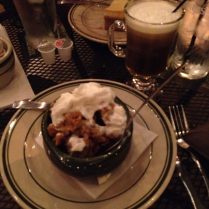 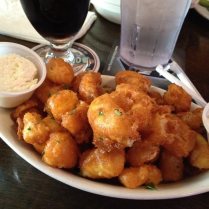 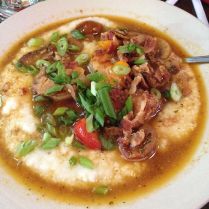 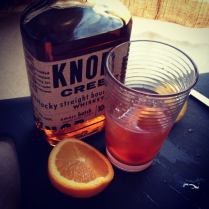 When I rolled out of bed at noon today, I took a selfie with my Boston Cream doughnut from Dunkin, but I spared you that one, because it’s really just a tangle of hair and icing. You’re welcome.

Did you do anything wonderful (I presume to celebrate our anniversary) over the weekend?

76 Responses to Our Sweet Sixteen Anniversary