Learning To Ride a Bike

You know those memes about first kid, second kid, etc? 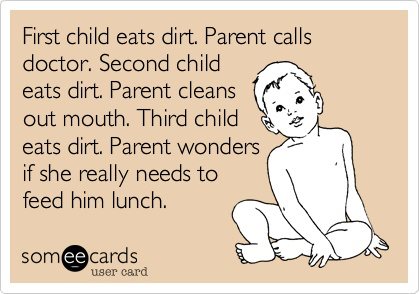 People who take care of smaller people all day do like to utilize their intellect for something, and may well perform psychological experiments on the job.
Over the years I’ve observed children, I’m willing to admit to having made harsh and rash judgments about the intellectual capabilities of five year olds based on their ability to play checkers. None of my assessments are wrong, mind you, but they are harsh and rash.
Other times, I’ve simply been the observer of behavior and drawn my own conclusions — as with our kids learning to ride a bike.

Before we were married, FIL taught Bubba to ride his bike. It took some serious time and commitment over many glorious spring afternoons. This seemed to be a sort of rite of passage for him, and my in-laws were so excited! their first grandchild! learning to ride a bike! so big! I’m sure MIL has photos of this and would love to tell you all about it.
At the time, I taught kindergarten, and I thought, pfft, he’s supposed to learn how to ride a bike, not exactly brain surgery! so I didn’t really take the epic drama in, more the nod and smile.
We bought Bubba at least three bikes. We refused to buy a fourth bike, because he took his third bike apart, destroyed it, really, in order to ‘make modifications’ and that is not our fault, now is it?
He rode his third bike everywhere, right up to when he murdered it. Despite my well-meaning neighbor telling me to keep my kids where I could see them, I let him have free rein of the entire addition.
(I remember saying to my neighbor, “They’re 10 and 12: they’re not gonna be happy to play sidewalk chalk and hang out in the kiddie pool all day!”)

We moved to a house in the burbs and bought Sissy a bike. Tired of waiting for her father to put the training wheels on, she learned to ride it without any help from anyone. The Mister jokes that no one wants Daddy to teach anything, cause Daddy’s a mean teacher. He’s not wrong, but I think this was more about independence. Sissy was a tough chick, even at the ripe old age of six, and she was already maxed-out on stubbornness. She came in and announced to me, “I can ride a bike now.” So I went outside and watched as she rode up and down the driveway with ease. That’s how she does. She just does things. Fiercely independent.
Sissy never got into riding a bike, even after we got her the awesome purple bike she asked for. I rode her bike. Her sisters rode her bike. She preferred to walk.

When Moo was two and Sassy was three, well, Sassy was already size 5/6 — I bought her a bike with training wheels already on it, and Moo a tricycle.
Well, Sassy wheeled around like a lil old lady on a Sunday drive. I walked faster than she rode her bicycle. My Gawd, the patience I had to have. She rode so slowly, she could barely get up the graduated ramps on the curb. I raised her training wheels bit by bit. Every time I raised them higher, she’d get on and say, “Ooh!” and stop when she tilted. She tottered along at a snail’s pace, smiling, with her princess helmet and her sparkly tassels glinting in the sun.
Meanwhile, Moo drove her tricycle like a bat out of Hell. Moo was one of those kids who needed a helmet to ride a tricycle. I’m not kidding. She’d spin around in the garage like Damien and I’d have to tell her to stop, my nerves just couldn’t take it.

When we went out, I’d try to convince Moo it’d be much nicer to ride in the wagon, but she’d have none of that. So I spent a lot of time chasing tricycling Moo. Y’all know I thought about tying a rope to the back of that tricycle, right? “Wait! Stop there! That’s far enough!” Meanwhile Sassy would be half a block behind us, grinning obliviously, stopping to wave. For years this went on.

One day, I watched as Moo, age four, picked up the bike of the girl across the street, hopped on it, and rode it. Just like that.
After that, Sassy asked me to take off her training wheels. Because if Moo could do it, she could, too. Sassy taught herself to ride in a short time, but like Sissy, she never loved it, and Moo took over her bike.

If you’re like me, these bicycle stories tell you a lot about their personalities, and ours, don’t they?

24 Responses to Learning To Ride a Bike