The Presence of a Man

On Saturday, I dropped Sassy off at the American Legion Mall, “Are those your people?”
“Yes.”
“Get out, vite! vite!”
I put the hazards on and double parked to let her out, and then I drove around to find a parking space.

The Universe was kind, offering me a spot on a corner, so I didn’t even have to officially parallel park, just pull over and back up. So nice.
I never use parking meters anymore. I took quarters, but the meters all indicated free parking. Has it always been like that? I dunno, my husband usually feeds the meter.
I’d parked two blocks west and three blocks south of Sassy.

It wasn’t too crowded by downtown standards, not for a Saturday with events. But guess how many times I was — whatever the phrase for that is — Verbally accosted? Sexually harassed? Made fearful by the behavior of lascivious men?
Go ahead and guess. 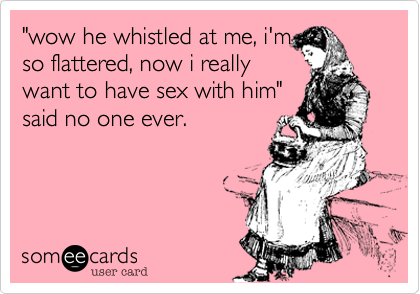 Y’all, I am not all that. I was dressed modestly. These things shouldn’t matter, by the by.

I am always with The Mister, or a gaggle of kids and a dog, or a pack of men, never a solitary woman on the street.

The only thing to do is to ignore it and keep moving. When you ignore them, the praise for what yer mama gave you turns into hate and threats. “Smile, Sugar!” becomes “Oh you ain’t got no smile for me? Fuckin bitch. Better watch out.”

What kinda fuckin lunatic walks from here to there with a smile plastered on his face?!? If I see anyone that happy, walkin alone, I will cross the goddamn street!

Men don’t know this unless they do it. The Mister had no idea for most of his life, but I informed him as I am informing you now. I once told him not to lead me through the crowd, but to walk behind me. He thought that was not strong and chivalrous. Well it is. It keeps not so honorable men from pawing and groping and pressing into me. He had no idea such things happened. 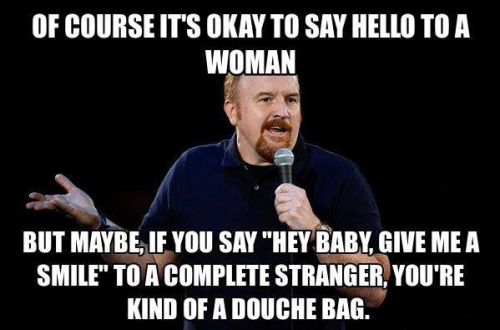 So when my inner rage and my “sweet ass” finally got to the grassy area and some asshole offered me some blow for a blow, I found it harder to ignore, but still I walked on.

Just when I’d settled in for the concert, some other asshole approached me asking me to make a call for him.
Y’all, I have let other stranger men use my phone, but either somethin about that guy wasn’t right, or prior events had unsettled me past the point of politesse, but I said no. I didn’t even look up.
“No.”
“Miss, I —-”
He was otherwise polite, I don’t know what he was goin on about, “local and” … still an asshole.
“I’m not makin a call for you. I don’t want to. There are plenty of other people with phones here. Go ask a man!”

On the way back to the car, as I kept right on the walk, a man approached. I kept my head up and made eye contact and he kept comin. He was 50-ish, handsome, well-dressed, but still he kept comin. He had a kinda walk, like prior military, assertive, confident. If I were a man, I’da been thinkin he wanted to kick my ass. what the fuck? why is this man not movin over? what kinda dick move is it to make a lady clear the way? He crossed to a car in front of me.
Then I saw a familiar face, as one is wont to do where one has lived so long. I couldn’t place the face beyond familiar…
He said, “Hello, how’s it goin?”
I said, “Good, thanks.”
oh my god that’s the mayor!
So we exchanged pleasantries how strangers do.
That other guy was his security detail.

I could benefit from security detail.
Lemme tell you, I am all about ‘I do not need a man.’
I love this one who’s got me, and I LIKE to have a man around.

I don’t owe anyone a fucking smile, or the use of my phone, and I shouldn’t need the presence of a man to enforce that.

49 Responses to The Presence of a Man