Schadenfreude is Majestic As Fuck

I mean, every now and again, I like to play “Boom! I Got Your Boyfriend” and laugh like a maniacal teenager, but that’s well below schadenfreude.

Personal vindication is like creamy vanilla ice cream and schadenfreude is like hot fudge. Put the two together and who needs a cherry on top? Well, I do, motherfucker.

All of my meanest stories involve schadenfreude, which is why I do not write them publicly. UNLESS I have permission from the subject. Such subjects are often unwilling to play the villainous victim.
The Mister has consented to his role in this story. He does not embarrass easily. He usually just says, “Fuck those people. I don’t give a fuck.”
This attitude is illustrated in his recent Snapchat selfie a la Sassy.

Have you ever been in a position where you’re not taken seriously, not acknowledged because the party in question has no experience and no education with said issue? Sure you have.
And you’ve all been on the other side.

As a person with anxiety disorder, I am constantly bombarded with the notion that I can snap out of it, or turn it off. People have literally suggested I calm down.
Oh, Okay!
That’s so cute! Isn’t that cute?

When I find the right buttons, I plan to turn off all my problems. Meanwhile, I am generally misunderstood and dismissed.

What does dying feel like? I don’t know. It feels like death. It feels very, very, very bad. People describe it differently — being swallowed up, being removed from the body, being frozen in time, being suffocated or smothered. Along with that usually goes the fear of going crazy, the fear of losing control over one’s body, the fear of fainting, the fear of having a heart attack. All that does is pretty much spazz a person out even more. Can’t see straight, can’t catch breath, heart races, chest hurts, limbs tingle — There’s a REALLY long list and it happens all at once which is terrifying.

Sick of being poo-pooed, I have WISHED panic attacks on plenty of people. That’s right, I said it. What? Oh, you’ve never wished anything like that, I’m sure, cause you’re a better person. Imagine what other people must wish upon a nice person like yourself. Hah.

Kneel before the gods of panic, shaking and crying, begging for your life, and then get back to me about how it’s all in my head, Fuckface.

With any luck, I could have the privilege of witnessing said panic attack, and I could sarcastically chide them, “Stop feeling like that! Don’t think about it! You’re fine!”

A girl can dream.

Long ago, when The Mister came home and told me he’d been to the emergency room for what turned out to be a panic attack, I listened to him describe the sensations and the fear, and I didn’t feel that satisfaction. I felt badly for him, I did.
Likely because he always listens to me and treats me with compassion.
I understood that he finally understood, having experienced panic in full technicolor. It was satisfying in an odd way, bonding even, but I didn’t get that hot fudge sundae feelin.

So I wait patiently for panic’s next victim, and my delicious schadenfreude. 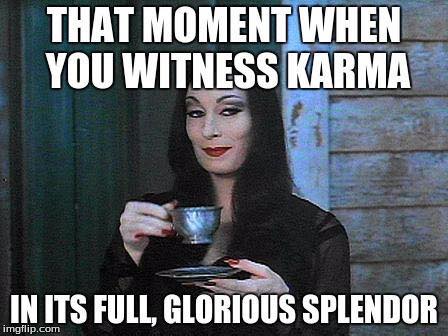 54 Responses to Schadenfreude is Majestic As Fuck