You may remember that I’m a bit anti-lights unless they’re twinkly lights?

Yeah. I am that parent who walks around the house hollerin about turnin all the lights off. That man I married has mocked me about it MANY TIMES for MANY YEARS.

However, he recently went on a grubby-puppy tirade about the main bathroom light. Just grubby-puppying Sassy up one side and down the other about how she’s too old for this chit and how every time he goes in there both the goshdurn lights are on — His vein was poppin and his jaw was locked — And then he said the thing that really got my attention — Somethin about he’ll take all the puppy lights out and we can all do every puppy thing in the puppy dark because for the love of all that’s puppy holy, light bills! And it’s not the money, it’s the principle.

Parents always have to add how it’s not the money, it’s the principle. It’s in the manual, ie, our parents said it.

I seldom turn the main bathroom light on. I don’t go in there much. But when I shower, I need light, cause I am very old now and I cannot read by candlelight and I will put the wrong product on the wrong part of me, or in the wrong order and I will fucking cry. I also need to plant one foot safely on the lil non-slip treads while I shave the opposite leg, because my name is not Grace. I think scooting my foot around feelin for that tread is exactly why I need the tread.

I gave The Mister the look.
Too much light gives me headaches, but so do his “YOU PEOPLE” speeches.

I said, “Yeah, turn the lights off.” Then I told Sassy she had to do dishes.

We were awesome parents that night. *Hi-Five*

Imagine my laughter, when, the following morning, after I had shampooed and shaved, the overhead light went out. Poof.

I would have told the people. We could have had a great big laugh about the irony. But they were all asleep.
But later, text with the fam: 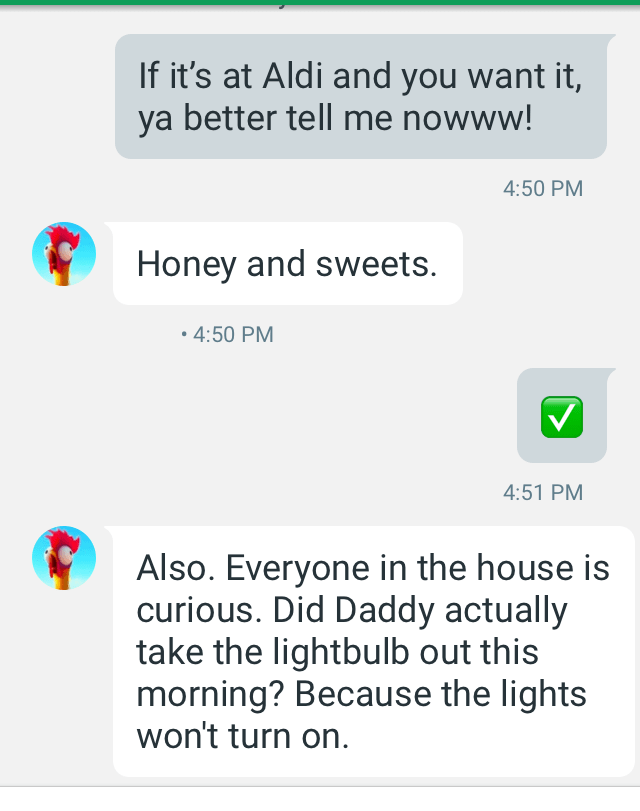 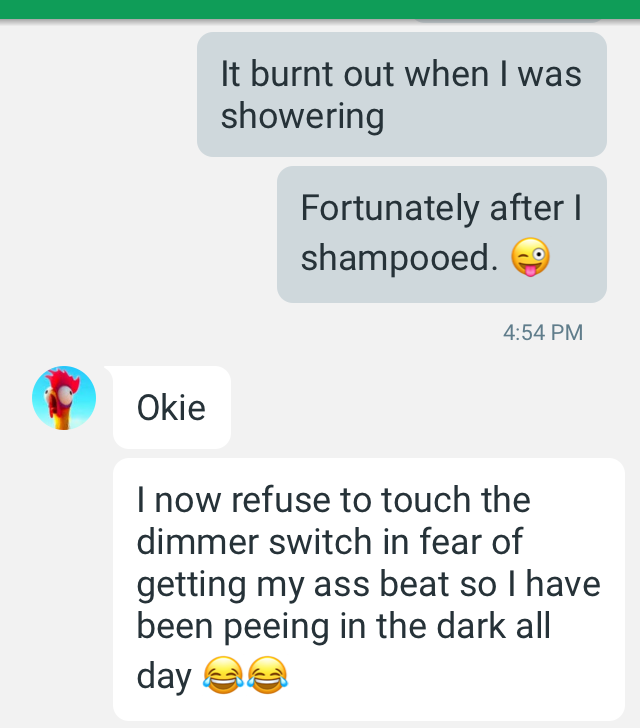 We pee in the dark all the time. Been peein in the dark for years. That’s why we get more iced coffees than she does.

49 Responses to Lights Out