On Drama and Deformity

Maybe some of you have never experienced any sorta psychic mumbo-jumbo like I have, but I bet some of you have.
Sometimes it’s a feeling, or a sight, or a sound, but it’s always a knowing.
Knowing happens in such a way that it defies explanation, which is why it’s tossed into the mumbo-jumbo bin, but those of us who experience the knowing, well, we KNOW. 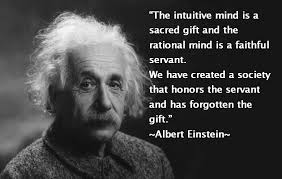 But I knew when I walked through my house.

We started out with a list of eighteen potential homes. We saw three houses before this one. Something about this house pulled us all in. Sassy was in love, just as much as I told her not to get her heart set on it, as I tried to reel my own hopes back in, she said she could not help herself. This wasn’t a “dream house” for any of us, but by the time we left, we knew it was our house. The essence of whatever that knowing is, caused us to tell the realtor that we were ready to bid.
It was a Friday night, as she locked the door, she said it’d been on the market for almost a year, and surely it would still be there Monday. My inner child didn’t like that answer, but I refrained from becoming frantic, because we had not, at that time, decided which financing option to take, and therefore, we really couldn’t fully commit to a bid.

Hours later, our agent called to say the seller had accepted a bid.

Then I tried to console myself, with the whole there-must-be-an-even-better-house bit.

The following Tuesday, we met with our agent to see four more houses. Our hopes were dashed. We would surely never feel that way about a house again. And it seemed like with every house we viewed, they just became less and less desirable to us.

after OUR HOUSE, all the houses looked like this

I started to think we’d just need to wait. The right house may not have opened up yet. In the back of my mind, and on the tip of my tongue to The Mister, I wondered if the bidders would be undone, and OUR HOUSE would go back on the market.

Three days later, we went to see two more houses, which weren’t impossibilities, but neither of them gave us “the feelin.”
After the last house, our realtor wanted to take us back to OUR HOUSE. Initially, it seemed like a cruel joke, as though she wanted to take us to show us what we could not have. Then she explained that the financing had fallen through with the bidders, and that while the seller was hoping they could work something out, in the meantime, it wouldn’t hurt to put a bid on it.

Oh good, a bidding war.
Seriously?
Why us?
See, once you’re emotionally attached to a house, you might be willing to do ridiculous shit, like bid to the point that you’ve put every last dime into it. And the reasonable person inside you, who likes a financial security net, will tell you to stop it, and just let those other people have it. But, emotional attachment, and longing – well, it’s impossible to make financial decisions with emotions, now isn’t it? Yes, yes, it is.

But the longing, with a sense of entitlement…I mean, it is your house, and just because those other bidders, poor things, can’t see it, doesn’t mean you can just sit idly by while they buy your house! You’ve got to fight for her! She knows you belong there, and you know she’s yours.
So we bid.

The urgency of the situation, with the other bidders searching for financing, and the seller wanting to close mid-month meant that we decided on a conventional mortgage so that it would be a speedier process. We waited days for the other bidders to be released from their bid.

We had our inspection. For a house built in 1920, this house was in remarkable shape. We asked the seller to update the breaker boxes, because house fires are bad, and because one of them looked like an overstuffed closet with colorful spaghetti falling out.
We had to wait for the seller to accept our request, and then for it to be fixed.

We had to keep sending in banking information, even days from closing — we never were told we had been approved, right up to closing. It was approved by the intake person, and then approved by initial underwriters, but I feared we would arrive at closing and the lender rep would be all, “Oh, sorry, your loan hasn’t gone through yet!” So when The Mister transferred our funds that morning, I found that I was particularly paranoid about money going into the limbo of cyberspace. Where exactly is our money for the hour it’s not in our account or theirs?!? I’m old school: I would have preferred a certified check. 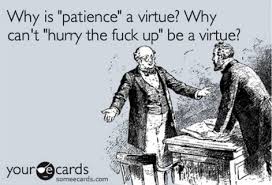 It was stressful, to say the least.

About a week before closing, I suffered my first panic attack in months, and the first one ever to be held in a bathtub. Bathtubs have always been a safe haven for me. Bathtubs are where I reduce and nullify my anxiety. HME asked if the panic attack might be from the house situation. I blew her idea off, because as we learned from the Oatmeal post, one does not ask WHY one has anxiety.

We closed on the 16th, late in the afternoon. By the time evening rolled around, I was sick, sick, sick! I was hot-tea’d, hot bath’d, and under my quilt by 8pm with what I assumed was exhaustion, and feared might be the flu.

The following morning, I woke up with swollen lymph nodes, particularly on the left, as well as a deformed lip. I’ve had a dozen or so cold sores in my life, but I’d never had one that turned my lip into a beak, and I’d certainly never had one so enormous, I could see it without a mirror!
Deformed. Totally painfully deformed. Here, you can see me, with what looks like a hearty double chin, and a swollen lip. I took this photo so that people who love me from afar would understand, I was NOT exaggerating. Boy, did they ever understand.

so ugly it hurts. or so painful it’s ugly. somethin like that.

The swelling and numbness was so profound, I could not feel my teeth or my gums on the left side of my face. SO, instead of going to our house, we set off to Urgent Care, where I was given a hefty dose of antibiotics, just in case it was Cellulitis. I slept all but a few hours of the weekend, barely ate a thing, burnt up with fever off and on — and it was only by Tuesday that I was fully-functioning. As for my appearance, it got worse before it got better. The blister scabbed to the size of a penny, and the lymph nodes reached epic proportions. I had no jawline, no chin.

I never thought I had taken my face for granted, but I assure you, I had. I now think I have a magnificent, well-formed, excellent face, and I shall enjoy it for all of my not-deformed days! 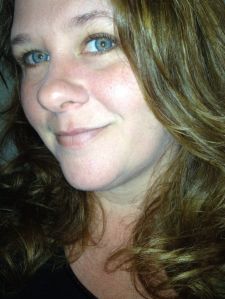 a month later — normal double chin, one spot of red on my lip, and no pain

If you’re not a person who reacts to stress immediately, and bodily, try not to take that for granted.

The movers came on the 21st (our anniversary), we began living at our house on the 23rd, started the girls in school on the 24th, and we didn’t discover our plumbing disaster until the 27th.
Plumbing disaster later.

10 Responses to On Drama and Deformity