Good Handwriting is a Useless Talent 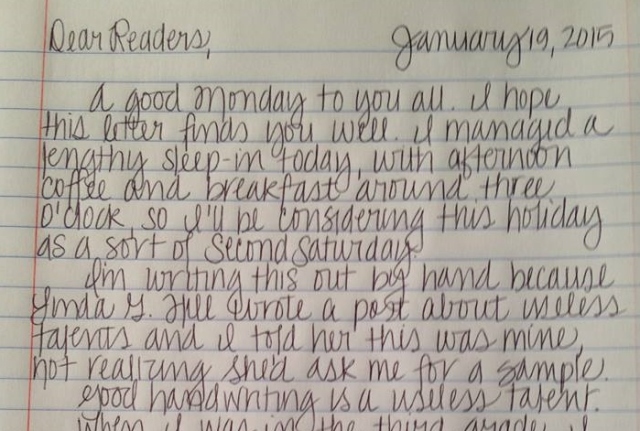 …When I was in the third grade, I won some of those scribe contests, the prizes for which were shiny ribbons. Useless ribbons for useless talent.

or so they say…

These days, I don’t think I could win any scribe contests, because I’m more of a scribble scrawler, even when arthritis isn’t killin me, which it often is. My writing was much neater when I was younger, but then I wrote more by hand then. I don’t write letters as often as I used to, which I think may be killin my mother, who writes like this: 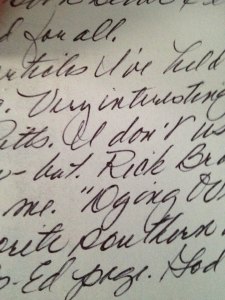 and this is just her scribble scrawl, y’all

See, my mother was a civil engineering draftsman, long before CAD, and she writes everything perfectly. 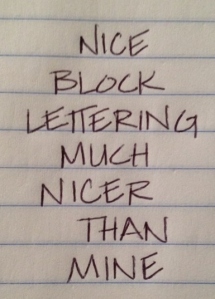 yes, we do our crosswords with a pen

When little girls are inclined to imitate their mothers, I must have aspired to handwriting greatness or somethin. I also dreamed of being long and tan like her, so at least this handwriting bit worked out for me.

It’s pretty typical that teachers have good penmanship, but even so, not a requirement.

These days, writing by hand just isn’t as common. When I fill out forms, I get compliments, which are perhaps even less useful than shiny ribbons. Can you imagine if compliments were currency?

I have addressed invitations and written recipe cards for people, as favors — like anyone would pay for that!

I could forge my father’s signature by the age of my poorly completed long division, but beyond that, being able to copy the handwriting of others has also proven to be a useless skill.

If I had anything of importance to say about handwriting, it would be that it needs to be taught.
My kids were all taught cursive, but many schools no longer teach it, and as such, students are not permitted to do assignments in cursive, because not all students can read it. As an English major, that seems unfathomable. Can you imagine how time-sucking and painful it would be to have printed out every essay you ever wrote?!? I can. Sounds bloody awful to me. It’s a form of illiteracy, being unable to read anything written in cursive. On a personal note, one day The Mister and I will be gone and I’m pleased that our kids will be able to read decades of our correspondence. 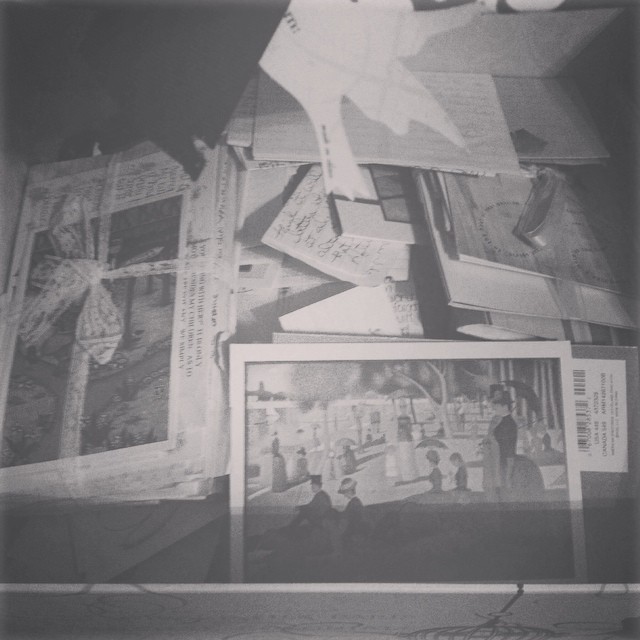 yes the mister has the handwriting of a serial killer, but he isn’t one

Good handwriting gets you nowhere. Do you have a useless talent? I won’t ask you for a demonstration.
Prolly.

This post is part of Just Jot It January, which is also via LindaGHill, because apparently, she inspires me.

47 Responses to Good Handwriting is a Useless Talent