Traditionally, in grade school, usually in 5th grade, central Indiana students visit The Benjamin Harrison Home. I’ve been inside this home three times. Once as a student, once as a teacher, and once as a parent chaperon. I’m sorry to have failed you, but I never thought I would be blogging about doors on something called an internet so I never took pictures.

When I was roaming around 14th & Delaware, I snapped some pics of the exterior, which should give you an indication of its 20,000 square-foot grandness.

you like that this photo is grainy. without the grainy bits, you can’t see the detail. 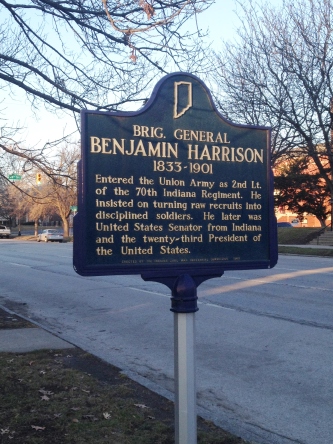 Over here in my neck of the woods, we still have Ft. Benjamin Harrison. It’s no longer a closed base with a proper garrison, but we still have what local civilians call “the finance center” (what military calls DFAS.)

There are plenty of things named after Harrison here in Indianapolis, most of them in that area. President Harrison was from Ohio, but he lived in Indianapolis most of his life and served as a senator here. He was the grandson of William Henry Harrison (9th POTUS.)

Benjamin Harrison (1833-1901) was not as beloved as a president as he was a soldier. It was a strange time, then, when Harrison, a Republican, did crazy things like preserve and declare National Forests, fight for pensions and disability payments to veterans and their families to the point of nearly bankrupting the treasury, and in State of the Union speeches, said things like black Americans should be given the right to vote and that Indians should be represented in Congress.

His doors and his home were beautiful, too.