Occasionally, The Mister watches soccer on television. Sometimes I look at it. How I do with most of his programming, I watch and wonder why I’ve tethered myself to a person who enjoys sports, westerns, and gruesome horror flicks.

What I think while I watch soccer: i suppose it’s warmer hockey. i’m glad the kids gave up soccer. too much hot. pretty grass though. i guess it’s not grass. do the english still pull up their lawns in winter? i suppose hockey is more like short soccer with ice. do they serve malts at soccer matches? surely soccer was first. i should look that up. such a big field. oh, you’ve lost it! the people work so hard to get the ball all the way to their goal and one big kick and they have to start all over. how exhausting. that’s a very nice color blue. if i played soccer, i’d wanna be on the team with the pretty blue shirts and socks. if i played soccer i would be chaffed af. when did humans decide to do this sorta goal chasing? one minute you’re chasin caribou over the plains and the next you’re like, let’s just chase a ball from one net to another. nice bum, mister blue shirt. i reckon the ball likes not being skinned and roasted at the end though. prolly happy to sit on a shelf in someone’s collection, reveling in its heydays. oh the blue people lost. how sad. what the fuck are we watching now? jesus fucking christ, space jam. honest to god, he’ll never know how much i love him.

I know soccer doesn’t start with oc. Occasionally does. Awkward does, too and I think that counts.

Oc makes me think of octopus, and Octomom, because frequently when Moo and I get into the car in the morning, she’s all, “Go Octomom!” even though I’ve explained to her that Octomom was a real thing and not one I’d like to be compared to. She means how much stuff I can carry at once, which I suppose is amazing right up til you’ve had children and you’re like I can eat this banana and talk on the phone while I nurse a baby and braid this one’s hair while I sew a button and pull apart Legos simultaneously. Men be like, “Let me carry that for you,” and I be all “Thank you, I have been carrying everything since I picked that apple twelve thousand years ago.”

I jot. I ramble. Occasionally more than occasionally. 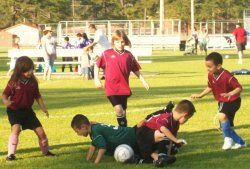 sassy the giantesse at her first soccer game. she was 7