I came home ravenous Friday night. The Mister said I was hangry. I was supposed to make salmon patties and a wedge salad, but honest to goodness, I just wanted to not cook but also not to be hungry. Sassy had a thing, and we had to wait to take her to the thing before we could go, which did not help my hanger. By the time we got her to the thing, it was prime time and everything was crowded of wait.

You can say it was date night, but it wasn’t a typical date night for us. One, we didn’t plan it — there was no heightened anticipation. Two, we were in our weekender clothes. Three, while he may have been wooing me, for me, it was all about the food.

We went to Gregory’s, you may recall that post, and if you don’t, that’s okay.

It was not crowded. Upon our arrival, there were several couples and a family dining.

The first thing that hit me was that it was like a piano bar, but with food instead of smoke. We both agreed the pianist played beautifully, but could have lowered the lid. He played classical, jazz, show tunes, even a bit of pop.

We were glad no one was singing. We’re awful like that.

It smelled yummy in there. My hanger plateaued.

We had a pleasant server. She recommended the carrots. More on that later.

She brought out rolls and I detected imported flour. They were so airy. I saved half to get at the leftover sauce in our next dish.

We ordered something called Julien, which was this: 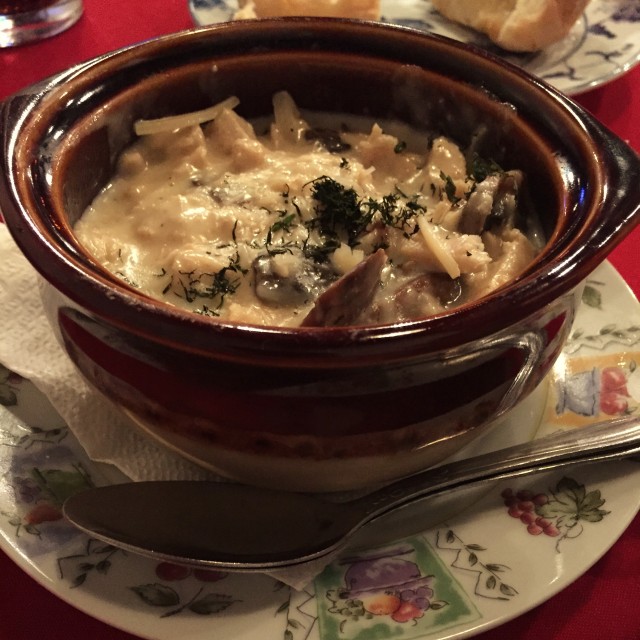 I was charmed by the individual pottery and the miniature spoons. It tasted like chicken and rice. I mean southern food: chicken and rice. Except there wasn’t any rice. It was chicken and mushroom and cream and cheese and it was yummy. I’m tellin ya, throw a lil rice in there and you could pass it off as chicken and rice at any potluck. I ate the mushrooms, The Mister ate the chicken.

We both chose Caesar salads. They were good.

As people left, the owner would come and change the red tablecloths. She asked how we came to be there, and I told her about Chad. She said, “Was long ago then,” and nodded. I’m guessing Chad is no more. Perhaps he didn’t recruit enough door hunters.

The Mister ordered lamb. He liked it. 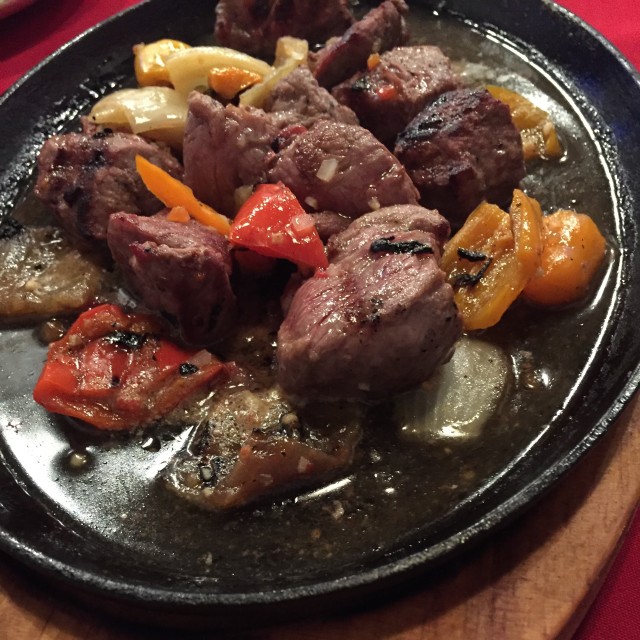 I ordered potato cakes. (Draniki) I liked them.

They put some pork on the plate, but I didn’t eat that. Still, can we note that they serve Joey-sized meat portions there? Like, that pork’s not in my way.

Y’all, the carrots. The carrots were unbelievably good. They were amazing. I know it sounds ridiculous to go on about carrots, but I cannot explain how incredible the carrots were. They were magical carrots. They were glazed, creamed, hell, I dunno, they were delicious. I ate them all and then I was sad. I would go back, order a main course of carrots, with a side of other veg and a potato cake, okay? Just give me the carrots! Dear me. Oh those carrots.

They do not rush you there. If you like a nice leisurely meal, it’s ideal.

I’d sat next to The Mister initially. You know, romantical. But once I stopped eating, I realized I was freezing. I couldn’t feel my toes and I huddled into my husband wishing he’d radiate just a bit more heat. Every time someone came in or out, I was certain I felt Siberian winds. I noticed the children dined with their coats on. I hadn’t worn a coat. It was well above freezing. Outside, anyway.

Now, as you know, my family thinks I live like a polar bear, so when I’m cold, it’s fairly entertaining.
I said, “Oh Baby, we shoulda dined in Hell, where they always have a fire going.” He thought that was hysterical, but when he roared with laughter, he created quite a breeze, adding to my misfortune.

I moved opposite him, a good four feet from the window. Which is when I finally noticed his hat.

We ordered a tiramisu and a Napoleon to go. We also ordered Moo some chicken and Crimean potatoes.

The Mister suggested I go out to the car while he wrapped up the check. I swear to you, the car that had been sitting out there over an hour was warmer than the restaurant.

We took Moo her chicken and then we sat outside waiting for Sassy’s thing to finish. I know you want me to say we fogged up the windows, but we played word games. Very sexy.

Once we got home, I split the desserts and it took all of us to eat them. Large dessert portions. Highly recommend the Napoleon.
Moo said the potatoes were wonderful and she wanted more of them. I like knowing she’d have a good meal there, too.

So yeah, interesting place, good food. I’d go back, but I’d wear a chic scarf and hat, and sit a lot closer to the kitchen.

One thing’s fersure — It’ll be the first place I think of next time our air-conditioning goes out.

45 Responses to We Finally Went