Last week, my mother wrote, “Here I am at my favorite Church on Sunday. The Church of Golf. The Legends Golf & Country Club. Life is good. Thank you Lord.”

not my mother — also, not me

Today is the Indianapolis 500.
That’s a church of sorts, as well.  It takes over the city for an entire month. People come from all over the world to cheer all over the infield.
It’s like a racin revival, because the Coca-Cola 600 is also on the television today. 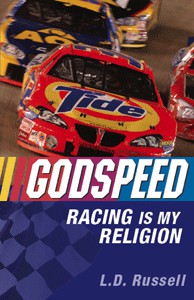 (In Indiana, we do corn, basketball, and racin.)

My parents frequented races when I was a small child.

I hated it. They just drive around really fast. Even at the age of eight, I knew that racing should only be fun for the person driving.
Besides, races were almost always hot places. Sometimes I met other children whose parents dragged them to races, and I would play with them, but mostly, I hung out in our camper.
>Flash to me with my Richard Scarry Rainy Day book, cutting out finger puppets and assembling a small village…

Sometimes parents say things that backfire on them…

I’d been living a lie, but telling the truth separated me from them.
>Flash to me spending a lot more time with my grandmothers.

Eventually, I got old enough to stay in the care of Drew’s parents: who dragged me around to churches instead of races.
You know, I still prefer churches to races? At least they have air-conditioning and you can hear yourself think.
(Yes, even as a child, I liked to hear myself think.)

I’m not sure what Sunday Worship for me is. Considering the last three or four years of my life, it might well be nine o’clock programming, with an altar of Haagen-Dazs…
Tonight, Game of Thrones and salted caramel gelato.