(Only two more days of Every Damn Day December)

Sometimes you’re just not in the mood to blog. I’ve waited all day for inspiration and it hasn’t yet come. I have no idea what I’m going to blog about, so that means this may be the most boring blog you’ll ever read, or I will start rambling on. My mood isn’t spectacular at the moment, so probably the latter. Try not to blame me. I don’t want to be responsible for your wasted time. Blame EvDaDaDec.

Tomorrow is Christmas dinner with the in-laws, etc. The Mister claims to hate holidays (and his birthday.) He always says he doesn’t want anything. Just look at his feigned excitement over things his mother sent years ago… 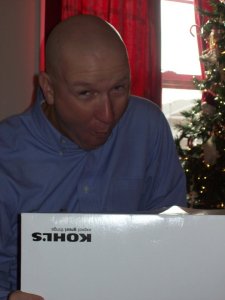 Personally, I think he’s a big fat liar about both subjects, and I plan to stare at him while he opens his gifts, because I enjoy watching him smile. And he’s handsome.

I really hope I get the gifts I asked for.

My in-laws go crazy at holidays.

My MIL’s Christmas tree rivals a department store tree, but with one hundred times the gifts. For the kids, it’s truly magical.

There was a year where The Mister had to drive our loot home in two trips, before we could all fit back in the van to go home. When we got home, it was my job to find a place for two hundred new things. In our 1700 sq ft home. With four kids.

I grew up with humble Christmases, with more focus on family and food and less emphasis on presents. That’s not to say I didn’t get some kick-ass gifts, but the only time my parents went overboard was the year they were retiring. It was so alarming, I feared someone was dying. About ten gifts in, I started to feel uneasy. I wish I was kidding.

When we got married, my MIL asked me for a Christmas List. I hadn’t written a Christmas List since I was twelve, so I felt a little odd while doing it, and embarrassed to give it to her. Then my FIL called to YELL AT ME because there wasn’t enough on there. When Christmas came, I got everything on my list and more. That’s culture shock.
I felt a sense of guilt.

I asked for two things this year. No one complained. Either they’ve grown accustomed to how difficult I am making their holidays, OR, they will buy me other crap anyway. Hopefully, I will get the two things I asked for, and not a pile of obligatory gifts to even out the way it looks…

I think they will spoil the crap out of the kids this year. It’s been so many years since they got to watch them open gifts, I predict mammoth wrapping paper mayhem. That makes me happy for everyone. So many smiling faces…

I’m pretty sure MIL will bawl at some point in the day. It’s strange. She’ll bawl if anyone’s missing, but she’ll bawl when we’re all there, too. I guess she just cries at holidays. Makes me glad she doesn’t drink.

And?!? No one asked me what I wanted at Christmas dinner! MIL asked Moo. *curses* Moo is the worst person to ask. Moo eats everything! When asked what she wants for dinner, she says things like “Broccoli and roasted red peppers and Oreos! Oh! And strawberry milk!” So she’s not the right person to ask. Moo doesn’t care. I care. I want noodles. Do you think it’s too late to demand noodles?

Yes, I did just make turkey noodles on Saturday. That’s not the point. They’re almost gone.