Sassy and I were watchin television last night, when a commercial came along to entertain us more than the show. I can’t even remember what show we were watchin, but I’ll never forget the commercial.
In the commercial, a school-aged child is blowing through his straw, making bubbles in his chocolate milk, while the baby sits next to him, sayin, “Again! Again!” The big brother blows more bubbles into his chocolate milk, and the chocolate milk bubbles right over the edges of the cup and onto the table, and down the side of the table, and the mother, she just smiles and unrolls some paper towels.

IN WHAT FUCKIN WORLD DO THESE COMMERCIAL PEOPLE LIVE?!?

I immediately broke into laughter, and I looked at Sassy, whose eyes had grown big, and her mouth had formed a small circle of disbelief.

Let alone the waste of milk…
And don’t listen to the baby, for cryin out loud! If we all did what the baby wanted, we’d live in a tent on the beach and eat nothin but s’mores and slushies for the rest of our lives! 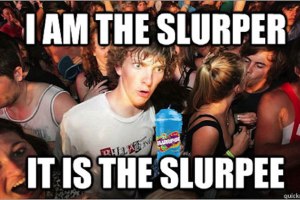 I’m sure commercial dads say somethin like, “Yes, Moo, I always go to Speedway for gas, and you can come, too! We’ll have special father-daughter bonding time over great big slushies!” but The Mister says things like, “It’s forty-seven degrees outside, so how about you have some nice hot cocoa, instead?” 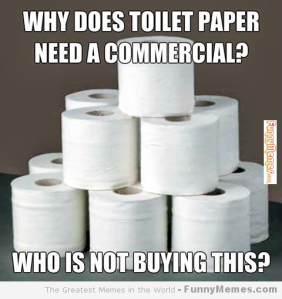 Today at the store, as Sassy and I cruised the pet aisle, she picked up one of those containers of the lightweight cat litter and pretended to hurl it at me, the way they do in a commercial. Honest to goodness, it’s lighter, but it is not an object I would ask anyone to throw my way. Oh, I’m sure The Mister could throw it, but I can’t think of a single reason I would ask anyone to throw me some cat litter. Ever. In fact, the sheer thought of this raises my ire, as I can only imagine dents in my drywall, and we all know that back hallway is the bane of my drywall finishing, painting, trim-painting existence, so no, no one will be encouraged to throw anything down the hall.

“Toss me that litter!” the commercial mom says, so Sassy said it too.
“Right, and when you break the window by tossing it, I’ll just laugh and shake my head, because I’m so happy we’re havin all the fun. Cause that happens.”

I think Sassy and I are destined to commit many more commercial parodies. 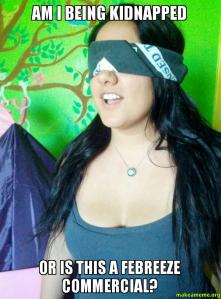 34 Responses to Commercials: Maybe Part One