I’ve been close with my in-laws since I was 13.
I’ve called them Mom and Dad since maybe 14 or 15.
They’re those kinds of people. Many people think of them as second parents or at the least, as people you can always turn to for support.
I love them.
They love me.
MIL likes me more than FIL and that’s okay, because I like her better, too. Some people just get on better with one another. When I do connect to FIL it feels wonderful, so there is that.

But they’re not my parents.
They’re The Mister’s parents.

Generally, we don’t feel obligated. But sometimes, when the stars are all out of order and nothing makes sense, MIL can tell we’re disconnected and this bothers her, she worries, and she begins the inquiry. Her soul can only be soothed by the knowledge of what is keeping us distant.
10% of the time, it’s just us. We are busy. We are caught up in our own lives.
90% of the time, that woman has sniffed out an actual issue and someone is sick, stressed-out, something has gone wrong.
As an empath, I can never fault her for saying she knew something was wrong, and as a mother, I can’t fault her for asking, “Why didn’t you tell us?”
We didn’t want to worry her?
We didn’t think she’d understand?
What’re we, twelve? 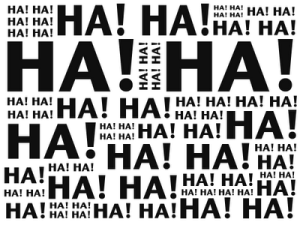 All this goes straight out the window when it comes to The Mister’s work. Particularly when he was military and deployed.
I know very little about my husband’s jobs.
We have never talked a lot about work.
Do you think The Mister could tell you what I’ve been planting, or how my novel’s comin along, or what paint color I’ve chosen for the powder room?
I know it sounds strange, but we just have a lot of other, more interesting things to talk about.

As a brand new Army wife on post, I learned quickly that people expected you to know what your husband did, his rank, his company, platoon, hell, even now I can’t remember all that crap.
I had no idea.
Me? “Um, mechanical stuff. On like, big stuff with whooshy things, not wheels, like tanks, but not just tanks, people carriers and stuff.”
(If you are knowledgeable in this area, then you know exactly how my ignorance was received.)
Eventually, I was able to say, “E company BSB FSC 3/69 AR” without missin a beat. Seriously, I have no idea.
When I finally got the track mechanic bit down, he told me he was actually working in personnel. Who knew?
It didn’t matter.
It didn’t matter when he worked claims or ran an auto center, and it doesn’t matter now that he’s in finance.

But to my MIL, these things matter. Especially when he deployed.
As deployments dragged on, I began to dread the calls from her, because she would ask me stuff that I couldn’t possibly answer, and sometimes, things he wasn’t even at liberty to tell me, not that I thought to ask.

But this would go on and on.

I was the most disappointing daughter-in-law that ever there was.
The Mister would email his father about stuff another soldier would understand, but that wasn’t stuff you could tell my MIL any more than it was stuff I wanted to know.

She was upset that she couldn’t find his base on her world map. Of course, I found this positively hysterical. She asked me for longitude and latitude and I was all, “Where the Tigris meets the Euphrates, so I guess The Garden of Eden.”

Awful, awful time.
I begged The Mister to call his parents. He should cover the never ending interrogation, I said. They’re HIS parents, I said.
Which is why, the other day, I alluded to this post’s origin.

Cause this kinda still happens now.
Have I heard from Bubba or Sissy? Guess what? Bubba and Sissy do not reside in a war zone and they have cell phones! She can call them! Isn’t that amazing?!? But I hafta tell her that every single time, because, “Yes, they’re okay” is not enough information. And a lot of what they tell me is too much information for MIL, ya know? 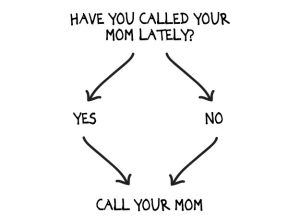 Y’all know what happened, don’t you?

MIL called.
“How is he?”
“Has he finished with his schooling?”
“How are his grades?”
“When are his finals?”
“When does his work class start?”
“Will he get special hours for that?”
“Is that at his work?”

Guess how many answers I had?
ZERO

“Now our friend X from church, her son works there, and he works crazy hours and I don’t know if he’s taking this class…”
“Mmhm.”
“Well tell him we’ve been thinkin about him and prayin for him.”
“Okay.”
“Have you heard from Bubba or Sissy lately?”
“Not lately, Mom, but you can always call them and let them know you miss them.”

So The Mister arrived home, probably well past dark, and I said, “You know how I kept telling you to call your mother? Well guess what? She called.”
Then he laughed and laughed, hearty, nearly maniacal laughter that had his whole body shaking.
Bastard.

Are you the go-between, or does someone else do your dirty work?

48 Responses to They’re YOUR Parents!