Over at Dramatic Momolgue (Best titles ever, by the by) you should see the incredible Tooth Fairy-Saving design she’s come up with.
I was totally jealous and immediately thought of climbin up the freakin bunk bed and diggin around under Bubba’s pillow for the itty bitty, teeny tiny teeth. Ugh.

Let me be clear: I never wanted to be The Tooth Fairy.

Drew told me (what she thought was) a charming story about how The Tooth Fairy collects the teeth to build her castle.
Disgusting and disturbing, am I right?

But see, we had another parent to contend with, and if one parent sets up the idea of the Tooth Fairy, then the child is all excited about the Tooth Fairy and you’re screwed.

So we had to Tooth Fairy for many years. *sigh*

I never liked it.
I’m a total killjoy about the imaginary characters of childhood. No creepy elves at my house, no Santa, no Easter Bunny, and no Tooth Fairy.
Yeah, yeah, yeah, magic of childhood, blah blah blah, fuck off with that noise.

I don’t think parents should lie to their children. Lies do not promote trust. I’m sure if you lie to your kids it works just fine, but I ain’t lyin to mine. much
I say terrible things to my children. Just terrible things that don’t correspond to society’s norms or expectations:
“Your goldfish died. We’re all gonna die.”

It’s not that hard, you can explain away the things other kids say. After all, these are people who tell your child how babies are made, or that giving the finger means I Hate You, and some of them have different gods and holidays, so you’ve already established the upper hand here.

At some point, Sissy came home and told me that her friend had a special Tooth Fairy who left presents, and she wanted that Tooth Fairy instead.
Fine. Whatever.
Presents. Sure.
We figured our other offspring were going to have teeth, but we thought we could avoid the whole Tooth Fairy Debacle. We would not espouse this ridiculous tradition.

Of course, we didn’t think our child would be addicted to her pacifier, either. Sassy was a giantesse at three, so she looked six, walkin around with her precious pacifiers. One in the mouth, one in each hand. She’d take it out to eat and drink and to speak, but she had to have at least one pacifier at all times.
The dentist was all, “Now. Get rid of the pacifier now. It’s starting to shape her palate.”
I was a teacher, I took lotsa child development and EdPsych. It was beyond oral fixation, we had potty-trained and we had self-weaned. Can you believe my child dared to be not-textbook?!?
We grew weary of paying the older children to hunt for ming-mings.
And then, on the interwebz, I read a story about the Magical Ming-Ming Fairy, who would collect all the ming-mings from the windowsill and disperse them to all the new babies who needed them, and I was all, “YES, I WILL LIE TO MY CHILD.”

So we paid extra to the older children that night. The Great Pacifier Round-Up.
We told Sassy this lie and for good measure, threw in how her cousin would be born and would need a ming-ming. She put all the ming-mings on the windowsill.
It worked.

When I was ever-so-pregnant with Moo, probably this week 13 years ago, I scraped off my car, and loaded up the baby to take Bubba and Sissy to school. My tummy barely fit behind the wheel. Ugh.
It was then eight-year-old Sissy informed me she lost a tooth.
I didn’t even skip a beat, “Well that’s just too damn bad. The Tooth Fairy is way too pregnant to go shoppin today.” Bubba laughed and laughed. I handed Sissy money. Like, all the paper bills in my purse. Like, a five and some ones. She was not unhappy.

Years later, when Sassy came home talkin about her loose tooth and The Tooth Fairy, I told her the charming story Drew told me, only I made it sound as sinister and nasty as could be. 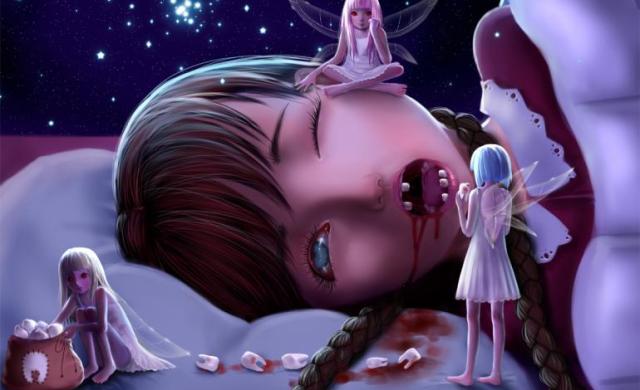 I told her like Santa Claus and Easter Bunny, The Tooth Fairy doesn’t visit our house. I told her when she lost a tooth, she could bring it to me and I’d give her money. For some reason, she seemed relieved.

39 Responses to Choose Your Lies Carefully